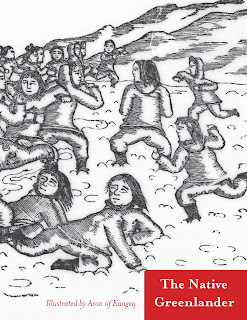 The Native Greenlander
Illustrated by Aron of Kangeq


This volume of tales, collected from native Greenlanders by Heinrich Rink, is the translation of the first book printed in Greenland. Over a five year span, Rink collected these tales from throughout Greenland, although mainly in the southern area.

The remarkable oral tradition of the Inuit, affected by few outside influences, is traced through their history on the land. Many of the stories describe the clashes between the Norse and the Inuit. Rink recognized that some of the tales existed in the realm of pure myth, but that others represented recollections, passed from one generation to the next, of events many centuries earlier.

Translated from Danish, this is the first English translation of these stories. Illustrations are by Aron of Kangeq, a sealer and walrus hunter who lived at the Moravian mission at the small trading station of Kangeq. His illustrations of the oral storytelling tradition have gained status as a symbol of the new artistic tradition developed in Greenland in the mid-19th century. 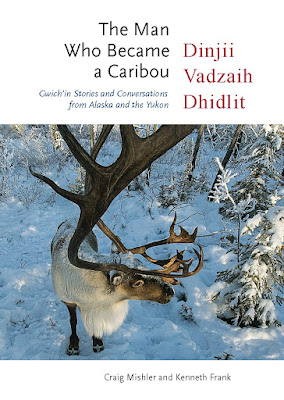 Dinjii Vadzaih Dhidlit: The Man Who Became a Caribou is a new bilingual volume based on a series of oral interviews with Gwich'in elders living in rural northeast Alaska and the Yukon Territory. Richly illustrated, the book covers a wide range of topics based on traditional harvesting and use of caribou from ancient to contemporary times. It also reveals traditional beliefs and taboos about caribou and includes a detailed naming system for caribou anatomy.

Recording the traditional ethnoscientific knowledge Gwich’in elders have about caribou in their oral narratives and in their hunting lexicon has far-reaching implications for zooarchaeology, for applied linguistics, for wildlife co-management, and for folklore and cultural anthropology. It is an empirical approach which essentially weds natural science with the humanities, osteology with verbal art. The topics included herein form a nucleus of many specialized study areas such as linguistic anthropology, zoosemiotics, ethnoscience, ethnozoology, osteology, and cultural ecology. And the Gwich’in ways of hunting, butchering and processing, preserving, storing, cooking, serving, tasting, and sharing food from the caribou, are all key elements in an ecological knowledge system.
--from the Introduction

While there has been attention to caribou, I do not know of any work that looks at caribou in this way, drawing on the knowledge of the Gwich’in (or any other northern group) in such a deep and first-hand way. The book spans many important areas, including what in western science would be identified as natural sciences, social sciences, and humanities. It makes outstanding contributions in these areas. It also still stands out in the overt recognition of the importance of the unfiltered voices of those who live with the caribou.
--Keren Rice, University of Toronto

This manuscript is an extensive collection of narratives. It presents an abundance of new data on an endangered language with extraordinary detail, grammatical and discursive. It also makes a critical contribution to the resources indigenous communities have for developing curriculum materials and institutionalizing indigenous studies in schools and elsewhere. Finally, it provides an amazing compendium of knowledge for resource management in the subarctic.
--Barbra Meek, University of Michigan 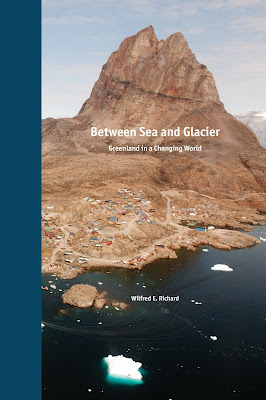 
The story of finding a people in possession of a spirit which reminds all of us that the world we inhabit is both larger and more fragile than we could have imagined.
"The people of Greenland possess a robust spirit, born of the land, which speaks to
me. At this time of the Age of Man, the Anthropocene, of human-induced climate
change, I recognize that a tradition of respect for the land prevails in Greenland. With
all the community dependent on the land, a spirit of cooperation has evolved through a
melding of Inuit communal culture with Scandinavian social democracy. I write of
Greenland, of its culture and people in possession of an existence, which is based on
hunter-gatherer knowledge of the land." From the introduction.
Wilfred Richard's spiritual journey to his new found second home culminates in a passionate recounting of his adventures through spectacular photographs and compassionate text.

A co-publication with with the Arctic Studies Center-Smithsonian Institution.
Posted by IPI Press at 12:54 PM No comments: 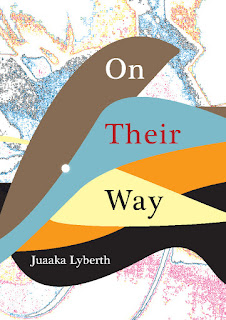 Paul Erik returns to Nuuk after spending the summer in his hometown of Uummannaq, Greenland. In Nuuk he attends high school where people from all over the country are housed in dormitories. But the school systems are Danish–not adapted to the life and circumstances in Greenland– and the young grow increasingly frustrated. The story takes place in 1969, and we gain an insight into a significant
period of Greenlandic history, as well as the dominating worldly cultural influences of the times.

Rovaniemi - The Polar Libraries Colloquy is pleased to announce the winner of the 2018 William Mills Prize for Non-Fiction Polar Books is Narwhal: Revealing an Arctic Legend edited by William W. Fitzhugh and Martin T. Nweeia (International Polar Institute). This comprehensive, multi-disciplinary book is the companion to a special exhibition at the Smithsonian National Museum of Natural History that unites what is known and erroneous about the medium-sized toothed whales uniquely identifiable by their spiral tusks.
The prize winner was announced at an awards ceremony on June 14, 2018, in Rovaniemi, Finland, at the Polar Library Colloquy's biennial conference. The Polar Libraries Colloquy is an international organization of librarians and others interested in the collection, preservation and dissemination of polar information.

Two other nominations were awarded Honorary Mentions.
The Arctic Guide: Wildlife of the Far North by Sharon Chester (Princeton University Press) is a beautifully illustrated field guide to more than 800 species of plants and animals found across the entire Holarctic region.
Lessons from the Arctic – How Roald Amundsen Won the Race to the South Pole by Geir O. Kløver (The Fram Museum) offers a detailed analysis of the 1911-1912 South Pole Expeditions of Roald Amundsen and Robert Falcon Scott.

The William Mills Book Prize is awarded every two years and honours the best Arctic or Antarctic non-fiction books published throughout the world. The prize was first presented in 2006. It is named in honour of William Mills, a polar librarian and author, and a core member of the Polar Libraries Colloquy during its formative years.
Twenty-six nominations qualified for consideration this year, the most ever since the inception of the prize. A full list of all titles nominated for the 2018 William Mills Prize, including those titles that were shortlisted, is available on the Polar Libraries Colloquy website. 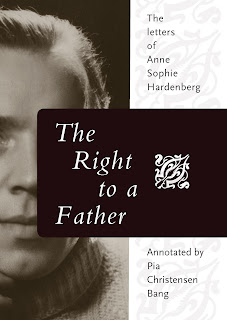 The Right to a Father

In the 40's and 50's many men travelled to Greenland from Denmark to work. Here they met Greenlandic women – which more than once resulted in pregnancies. Many of these men then returned to Denmark, which meant that the children grew up as illegitimate children without ever knowing their fathers. One of these children was Anne Sofie Hardenberg, who was teased all through her childhood for having a Danish father – and an absent one at that. By the age of 17 she gathered the courage to write to her father. To her surprise he was very glad to hear from her, and wished to make her part of his family. Unfortunately they only got three weeks together – then he died in a car accident . . .

This is Anne Sofie's memoir accompanied by photos and letters between her and her Danish family.

The Meaning of Ice awarded the inaugural Mohn Prize

The Mohn Prize was established in collaboration between Academia Borealis, The Academy of Sciences and Letters of Northern Norway (NNVA), the Tromsø Research Foundation (TFS) and UiT, The Arctic University of Norway (UiT).

The objective of the prize is to recognize research related to the Arctic. Furthermore, it aims to put issues of particular relevance to the future development of the Arctic on the national and international agenda.

From the press release:
The research group behind the Meaning of Ice consists of 13 researchers and indigenous experts from Alaska, Canada and Greenland. The project The Dynamics of Human-Sea Ice Relations: Comparing Changing Environments in Alaska, Nunavut and Greenland was implemented from 2006-2011. The project involved more than 40 participants, an overwhelming majority of which were indigenous experts with unrivaled experience-based knowledge of the Arctic.

About The Meaning of Ice 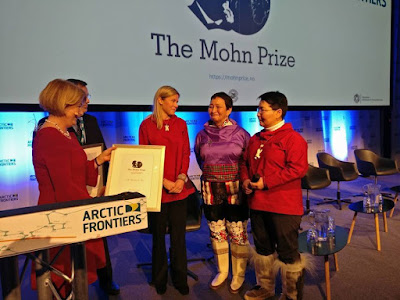 Excellent research and groundbreaking knowledge
An excerpt from the award justification states that: “This project made groundbreaking contribution to our understanding of Arctic ice-dominated systems via a highly innovative combination of natural science, social science and indigenous knowledge.”
A leader in his/her/their field
An excerpt from the award justification concludes that: “This project exemplifies a major development in Arctic science that will stimulate others to make use of similar procedures to address a wide range of topics in the coming years.”
Relevance to the future development of the Arctic
An excerpt from the award justification states that: “Changes in the Arctic environment are now verified independently by both scientific methods and observations of the Arctic residents. Inherent to a sustainable Arctic is resilient local communities continuing their use of ice-dominated environment based on established knowledge systems, culture-based values, and indigenous languages.”
Based on these three criteria, the Scientific Committee strongly recommended that The Meaning of Ice should be honored as one of the laureates because the consortium is a unique example of “collaboration between academics and indigenous experts which has given us new knowledge of and understanding about the Arctic, and has developed an advanced understanding of the dynamics of the Arctic sea ice”.

The importance of an Arctic prize

The term ‘High North’ (or alternatively ‘Circumpolar North’) is often used to describe the area between the North Pole and the Arctic Circle. Through the Mohn Prize, NNVA, TFS and UiT wish to honour knowledge builders who have contributed groundbreaking new insights in the Arctic and the High North. The Scientific Committee believes the Mohn Prize has the potential to set the standard for outstanding research connected to the Arctic and the High North. Arctic research has been taking place in, and based out of Tromsø, for more than a century. For nearly 50 years, the research environments in Tromsø have developed world leading competence in Arctic natural and social sciences. The international interest in the Arctic is largely motivated by climate changes that are clearly expressed in the region, and by the rich natural resources found here.
Posted by IPI Press at 10:12 AM No comments: